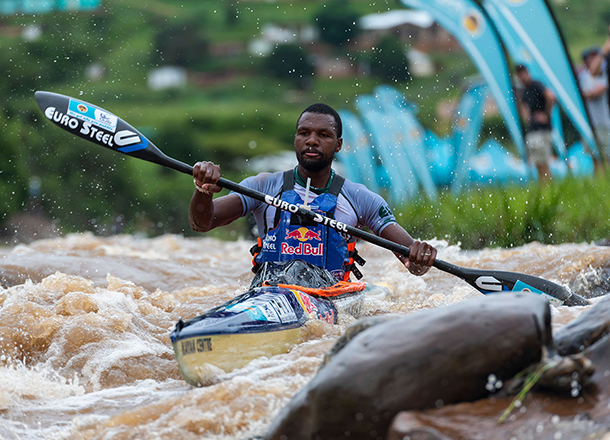 As the dust settles on the popular summer Dusi canoeing, the Elite Athlete Development Programme (EADP) can reflect on several excellent performances in the iconic FNB Dusi Canoe Marathon and the one-day Non-Stop Dusi a fortnight later.

Leading the charge for the EADP was Sbonelo Khwela, whose quest for the Dusi K1 title relied heavily on the intervention of the medical team at Prime Human Performance Institute at Moses Mabhida Stadium.

The men’s race turned into an exciting showdown with Khwela pushing former EADP star Andy Birkett all the way to the line with the nine-time champion eventually beating Khwela by just over two minutes.

The build-up to the 2019 race was far from ideal for Red Bull/Euro Steel star Khwela, who had to fight a recurring illness which hampered his summer training. The team at Prime was crucial in helping him get over that hurdle.

“Dr Subban helped out so much when I was down with bilharzia,” Khwela said. “It was important that I managed to get better completely before I started training again so that meant that I only began in December properly.

“I spent a lot of time at Prime with Jarryd (Rudolph) trying to get myself in a good position, but I also feel that starting later was better for me because I got to the race and wasn’t burnt out at all.”

Khwela’s showdown with Birkett was the closest yet and despite chasing one of the modern greats of the race he felt that his pre-race focus was correct.

“This year I wanted to focus on my strengths and that has always been running.

“I pushed myself harder on the runs this year during my training and I thought that I ran really well which is encouraging!

Canoe marathon star Hank McGregor’s Dusi didn’t go according to plan with the veteran running into trouble early on day one which curtailed his charge for a second K1 title at the event.

McGregor came unstuck at the Taxi Rapid which broke the footrest in his boat and he had to limp home on day one.

He then put in two remarkable days of paddling and ended up finishing ninth overall, registering the second fastest time on day two behind Birkett.

Banetse Nkhoesa was a paddler that was hoping for a strong Dusi however illness hit during the race and he had to power through as hard as he could.

It was a still a strong performance from Nkhoesa and he finished 12th overall.

In the ladies race Jenna Ward was in line for a podium finish however she battled through the final day and lost and end sprint to the young Amy Peckett to finish fourth in the race.

Following the Dusi was the Non-Stop just a few weeks later and legend of the ‘Dusi in a Day’ Sbonelo Khwela won his eighth title at the event.

Khwela got himself in front fairly early in the race and never looked back despite the K2 combination of Banetse Nkhoesa and Thabani Msiya breathing down his neck.

His second place finish at the Non-Stop Dusi proved that Nkhoesa is a threat on the Msundusi and Mngeni Rivers despite his Dusi result.

The young talent will be a force at the K2 edition of the Dusi in 2020.